Two of my keenest interests, medicine and driving, can seem as unrelated to each other as knitting and skydiving. But it turns out that medicine is as relevant to driving as rubber and tarmac.

I became intimately aware of just how tied driving and medicine could be when early in 2016 I took on the job of overhauling the document, ‘Assessing fitness to drive – a guide for medical professionals’. The guidance is from Britain’s Driver and Vehicle Licensing Agency. The DVLA’s senior medical adviser, Dr Wyn Parry, introduced the new guidance in a blog post.

Of course, it is obvious that we need good health to drive. I had imagined, though, that this would be a fairly binary decision: yes you could drive or no you couldn’t. Don’t get behind the wheel when taking drugs that make you feel drowsy, when drunk or when you’ve lost your eyesight – nothing less straightforward than that.

In reality, it is much more complex. While in law everyone who is licensed to drive has this simple responsibility to ensure they are fit and safe to do so at any one time, some of the complexity comes in when decisions are needed about whether a person should continue to have that licence or not (or be issued an initial licence).

The DVLA has a number of medical advisers working out how people’s medical conditions affect their fitness to drive. I found it refreshing and heartening to see the effort that goes into ensuring that only truly disabling misfortune could take away the licence to automotive independence.

The guidance I edited now runs to 130 pages. Doctors zone in on the conditions that are relevant to their patients – the guide covers dozens of them, from stroke and heart attack to drug dependence, diabetes and cancer. If there is a medical condition that affects any ability to see, think or to operate vehicle controls, there is an entry for it.

The DVLA has, for decades, assessed individual licensing of people affected by disease. The document to help doctors guide patients on what the DVLA is likely to say about a particular condition has also been around a long time, since the 1970s. It apparently hadn’t changed much when I came to edit it.

When I first read through it, I was transported back – as I often am when tasked with editing technical medical authoring – to the days when doctors used unnecessarily difficult, opaque language and wore white coats for absolutely everything.

Doctors took this approach of talking their own language so that they could keep their ownership over medical decisions, and could really hold themselves apart as the experts they surely are. But the worst of those days of patronizing medicine, of ‘doctor knows best’, were maintained by nothing more than long and obscure words strung together in muddy sentences. And so it was, a bit, with the guidance on fitness to drive.

The other thing this language has done for doctors has been to keep the medical hierarchy intact. If your job as a senior doctor was to tell other doctors what to do, you had to be that bit more opaque about what you knew best. Your underlings would then gaze up at your secret knowledge – and keep it to themselves after cracking the code.

I generalize, of course – but general truths can be generalized.

To be fair though, the guidance I hacked away at wasn’t quite as opaque as I make it sound, but the new version, complete with my addition of symbols to indicate key messages, is in a new world of comparative simplicity. Also to be fair, the guidance was nowhere near as opaque as the law it remains based on. This is written in a language that about four people in the world can keep up with. The legislation on epilepsy, for example, in the 1988 Road Traffic Act, has numerous paragraphs that read like the following:

That was surely the work of pompous lawyers competing with pompous doctors for the greatest amount of pomposity. Specialist doctors dealing with epilepsy patients may well have some training, or at least the motivation, to get their heads around this nonsense, but regular doctors, to avoid triggering a seizure of their own, really need to use the simplified guide that I’m proud to have had my part in bringing up to date. 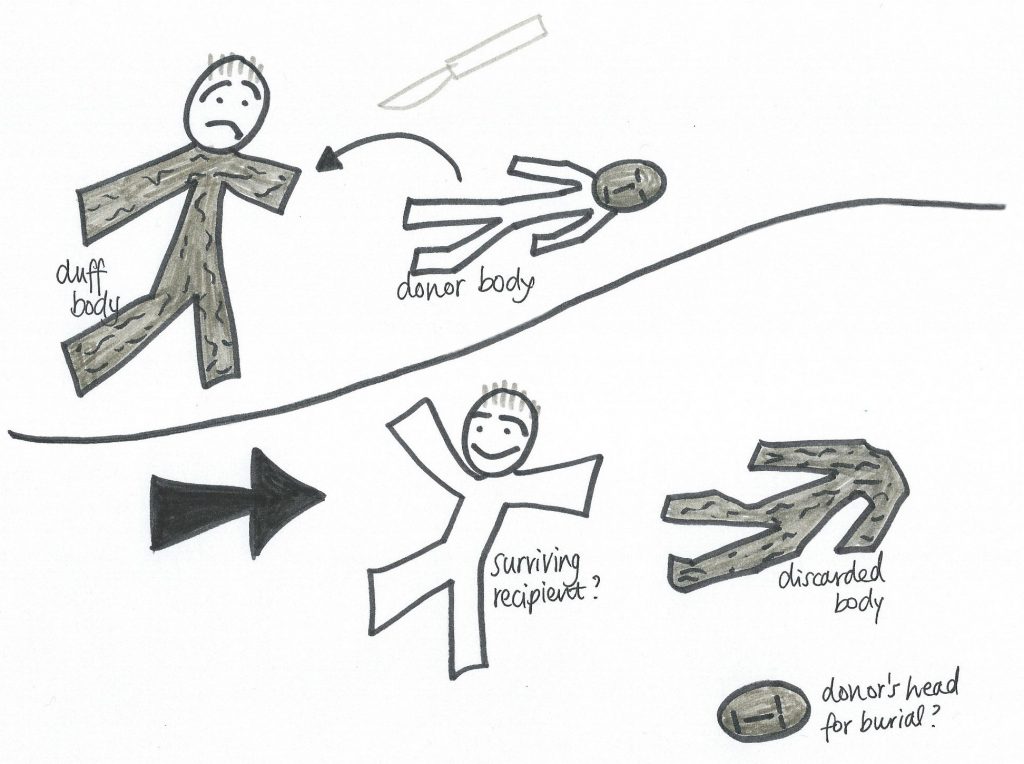 Dr Sergio Canavero wants to transplant a head from one human body rendered hopeless by disease onto another human body, provided by a dead but otherwise healthy donor.

What is really happening is that the person, principally residing in the head, is being given the body of someone else: a body transplant.

And if you thought relationships between body and mind were big issues, body transplants are a whole new world of conflict between the two.

The small challenges stopping Dr Canavero so far are largely twofold: technical and, yes, immunological. The technical expertise is needed to avoid the head dying in the surgical time between the point of severance from the duff body – including a clean slice through the spinal cord – and the point of successful connection to the new body.

The operation would have to keep an eye on the 45-minute mark between these two points – a deadline that is fine as long as the head is kept cool enough to withstand having no body attached to it for that long.

If attachment is successful, the body must then be quelled in its attempt to mount a seek-and-destroy immune attack against the new head.

But these technical and immunological challenges are trivial really. With enough money, will and persistent trial-and-error science has succeeded in splitting the atom, landing us on the moon and cloning Dolly the sheep.

To really hold Dr Canavero back, the ethical questions are all that will remain in the end. Except that if he is mad enough to do it, there will be someone desperate enough to want it, and some place somewhere ready to host the crazy spectacle – somehow convinced that the risks will be outweighed by the benefits.

But I hope that money and fame for a surgeon (and his sponsors and host) do not factor too heavily in this calculation. Or, even with those dilemmas taken care of in the extremely complex risk-benefit ratio, I hope that the (I assume) sincere but wild dreams of one doctor to improve the lot of people with heads trapped on functionally dead bodies will not be the only dreams that count. The potential nightmares – including literally the nightmares for these people, and metaphorically for us all in general – need due weight, too.

And if ethical go-ahead did follow technical feasibility (two very big ifs), could we hope that the boundaries of the precedent were tight enough to dash any wider expectations that new bodies donated by the brain-dead could be ordered up for relatively trivial reasons?

There is not much distance, too, from such ideas to that of swapping out, for example, a selected person’s brain riddled with Alzheimer’s for the freshly deceased but otherwise healthy brain of someone else.

Sorry, that is a slightly hysterical alarm call, because it is quite a bit of distance really when the person principally resides in the head and Dr Canavero’s dream of a head transplant is actually that of a body transplant. But the distance to brain transplants is nonetheless shortened by the idea.

Thankfully, the future for meeting modern demands for new bodies in extreme cases is far more likely to be sustained by numerous other options. Perhaps even the most desperate option would become more widely allowable, too: if there could be sound means of safeguarding individuals’ considerations for euthanasia.

For new bodies, though, Dr Canavero’s particular notion cannot be sustained, let alone sustained with any fairness. This lack of feasibility in the idea will remain, as will the ethical dangers, even if his multimillion pound theatre slot could be successful, and let alone if it could be replicable.

The body problems desperately seeking such solutions are instead far more likely to be resolved by the concepts of cloning and engineering of tissues and organs, and by the advances in nanomedicine, materials, and so on. Perhaps humanlike robot bodies will be developed for human heads, Doctor Who-style.

And we’ll look back at that fun moment when ‘head’ transplants were once entertained and maybe even attempted.

Dr Canavero’s intention was the subject of one of the medical news analysis articles I wrote for medicalnewstoday.com.

You can hear my interview with a surgeon who pioneered face transplantation all the way back in 2007. I recorded an interview with the clinical psychologist working with him, too.